A continuation of Post # 21 "Understand God's Plan of Salvation"

A beautiful true story for all, dedicated especially for all Protestants,
our brothers and sisters. I hope you will like it.
A Protestant boy and The"Hail Mary". (A story)
Luke 1:28 And the angel being come in, said unto her:
Hail, full of grace, the Lord is with thee:
blessed art thou among women.
Luke 1:41 And it came to pass, that when Elizabeth heard the
salutation of Mary, the infant leaped in her womb.
And Elizabeth was filled with the Holy Ghost:
Luke 1:42 And she cried out with a loud voice, and said:
Blessed art thou among women, and blessed is the fruit of thy womb.
And remember:
"No Mary No Jesus - Know Mary Know Jesus"


Interesting links for Protestants:
PROTESTANT PASTOR BECOMES CATHOLIC:
http://www.youtube.com/watch?v=zgQ9xk...
Converts-Into-Catholicism
THE EXORCISM OF NICOLA AUBREY:
http://olrl.org/stories/exorcism.shtml
Triumph-of-the-Blessed-Sacrament-History-the-Exorcism-of-Nicola-Aubrey
What is a Mother?
A mother is someone to shelter and guide us,
To love us, whatever we do,
With a warm understanding and infinite patience,
And wonderful gentleness, too.
How often a mother means swift reassurance
In soothing our small, childish fears,
How tenderly mothers watch over their children
And treasure them all through the years.
The hearth of a mother is full of forgiveness
For any mistake, big or small,
And generous always in helping her family
Whose needs she has placed above all.
A mother can utter a word of compassion
And make all our cares fall away,
She can brighten a home with the sound of her laughter
And make life delightful and gay.
A mother possesses incredible wisdom
And wonderful insight and skill-
In each human heart is that one special corner
Which only a mother can fill!
Author of Poem: Katherine Nelson Davis

The son to be born is Jesus (called Emmanuel - God with us).
Isaiah 7:14 Therefore the Lord himself shall give you a sign. Behold a virgin shall conceive, and bear a son, and his name shall be called Emmanuel


Matthew 1:23 Behold a virgin shall be with child, and bring forth a son, and they shall call his name Emmanuel, which being interpreted is, God with us.


And She will be there for you no matter how painful!

This is the only title that Mary gave Herself. All others (example: Queen of Peace, Immaculate Conception, Mother of God. etc..) are honors given by the people of God based on what were witnessed as God's design of her life. By saying 'handmaid of the Lord' she gave up her most precious gift of freedom. Freedom is the only thing that is our very own - which even God cannot take away from us. Mary's surrender of this gift of freedom, therefore, shows her TOTAL ABANDONMENT TO GOD  and HIS PLAN.

THE HANDMAID THAT PAVED
THE DIVISION OF THE WORLD 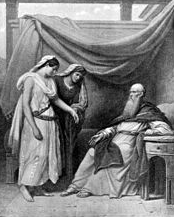 Jewish Attitude Towards Servant and Woman
Therefore, a 'handmaid' who is literally a 'woman servant' is the lowliest of the low, absolutely empty, completely no worth at all, at the complete disposal of her master.

The handmaid attitude is the basic condition for the Plan of God to be unfolded. It is the first condition of true Christian living, a true self-surrender, a supreme humility and obedience. When we can do this then God can work easily through us. But when we empty ourselves as Mary did), then we can truly be filled with God's grace and inspiration to work from Him, to do His Plan. God can only be within us if we throw away everything else that is hindrance to Him, our selfishness, worldliness, lust, pride, etc. A handmaid does not pre-empt her master by making her own plans or making her master to grant her every wish and whim, instead, she waits for His orders and fulfills them. If she has a request or a wish, then she can only pray that He grants it if He sees fit and if it is according to His will.

Analogy: A cup filled with Coke cannot be filled with 7-up. The Coke has to be thrown away first for the drinker to truly taste the flavor of 7-up and appreciate it.

The handmaid attitude also helps us bear the crosses of suffering and persecution. A handmaid accepts suffering and persecution because she realizes that she is totally dependent on God (the lives and ways of the Anawims). If He chooses to send her pain, then she must accept it and be thankful that He send her this gifts to strengthen and purify her, to train her to acquire a wisdom and understanding in the redemptive value of suffering. "If all humanity will realize the value of suffering, they will not look for pleasure but for pain" (Padre Pio). We do not and cannot understand the pain of individual events sometimes, however, even if we only see the bits and pieces that lock terrible, we must TRUST God that the total picture is surely a masterpiece, beautifully made in His time.

to be continued here..... posting No. 26 Mary's Role In God's Plan of Salvation